He Moku, He Kanaka
Celebrating Our Pacific Seafaring Heritage 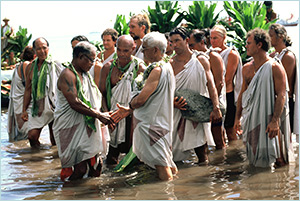 As Hōkūle‘a and her companion vessel, Hikianalia, embark on a journey to spread the message of Mālama Honua, they represent an island nation and a people—he moku, he kanaka—that is much larger than Hawai‘i or Polynesia alone. They represent our collective identity as the people of Oceania. We are part of a shared Pacific heritage and have a responsibility to each other to help strengthen and move our cultures forward into the future. The ocean does not separate our islands, but instead brings us closer together.

Our students join in song to honor some of the most celebrated voyagers and canoes of the last millennium, including those of today. And while Hōkūle‘a prepares to leave the Pacific for the first time, Hikianalia, will soon be returning home to inspire a new generation of Hawaiian leaders to step forward. 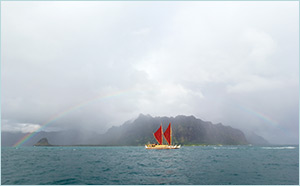 Our identity as Native Hawaiians is rooted in our Polynesian heritage. Upon wa‘a kaulua—double-hulled voyaging canoes—our ancestors transported people, landscapes, ideas and aspirations as they traversed the largest body of water on earth at will. Their ancestral intelligence and ingenuity was reborn and embodied in the Hōkūle‘a—a 20th century replica of a traditional voyaging canoe that successfully sailed to Tahiti and back in 1976—quieting the critics, and uniting our people. Today, Hōkūle‘a has sailed more than 150,000 nautical miles, a distance greater than seven times around the earth. The mele and hula of this year’s hōʻike honor the voyages that reconnect us to Kahiki our Polynesian homeland, and inspire people of all ages and cultures around the world.

Louise Aoe McGregor Award recognizes the student director who has made the most significant contribution to the class in organizational ability, leadership, assistance to others and persistence.

Richard Lyman, Jr., ‘Ōlelo Makuahine Award recognizes excellence in the use of the Hawaiian language within a song.

George Alanson Andrus Cup is awarded to the winner of the men’s competition.

New England Mother’s Cup is awarded to the winner of the women’s competition.

Charles E. King Cup is awarded to the winner of the combined class competition.

The Song Contest is unique to Kamehameha—a tradition that has involved all students in musical competition for ninety-four years. Miss Laura Brown, Director of Music at Kamehameha 1926–1947, stated that “the objectives of the song contest are to build up the repertoire of the best in Hawaiian music for the cultural heritage of any student who attends Kamehameha; to develop leadership, cooperation and good class spirit; and to give students the use of their singing voices and to give them pleasure in singing as a means of expression.”